Showing posts from April, 2014
Show All

Time for a tick

I found my first tick yesterday. On me. I daresay that they’re all around us, floating like tiny little spiders over the East Devon heathland, but the ones that count are those that you spot suddenly after feeling that familiar little itch just when you’ve had a good day’s gardening. A tiny black spot, sometimes in a very awkward place on your body and you know that it’s time to get out the tick hook.
It’s been ages since I first wrote some warning words about ticks at http://budleighbrewsterunited.blogspot.co.uk/2009/05/ticked-off.html and that was in connection with our sister town in Brewster, Massachusetts, where Lyme disease can be a serious problem.
Having extracted my tick I put it on a window sill and watched it. For such tiny creatures they move fast; this one seemed to be showing off, performing the occasional somersault. I wondered whether they might have been used in circuses, like fleas. Finally I called time on it.
My little tick bite yesterday came just after I’d read ab…
Post a Comment
Read more

Budleigh Salterton has always prided itself on the number of its specialist shops, providing that little extra bit of service to customers, and James Findlay certainly includes his among them.Occupying a prime position on the town’sHigh Street, Budleigh Wines offers a vast range of drinks to suit every customer’s palate.

The latest to join the growing number of Corporate Friends of Fairlynch, 25-year-old James is a keen supporter of the Museum because of his interest in the town’s heritage.Budleigh-born, he feels a strong link with the local fishing industry through his mother, a member of the Rogers family.
Heritage in the drinks business is a fascinating subject, says James. With the popularity of real ales and the rapid upsurge in the number of micro-breweries all over Britain in recent years there’s been a keen interest in traditional brewing recipes.
The Chester-based brewery Spitting Feathers has even gone as far as using a recipe created by analysing residues found in pots discove…
Post a Comment
Read more

Read any good books lately? asks the poster.The Good Book Sale at Fairlynch Museum on 28 June 2014 will be a great opportunity to find books recommended by Friends of Fairlynch and others at bargain prices.
But the organisers need good books to get started.
If you have any that you think people would enjoy please start making a pile of them ready to take to the Museum during opening hours.Or you can phone for a collection to be made from your home: 01395 442666 or 01395 446429.
Just one or two books offered as a gift to the Museum would be appreciated by the organisers if you don’t have an entire library to give away.Please start looking now.
Post a Comment
Read more

The Susan Ward Collection at Fairlynch 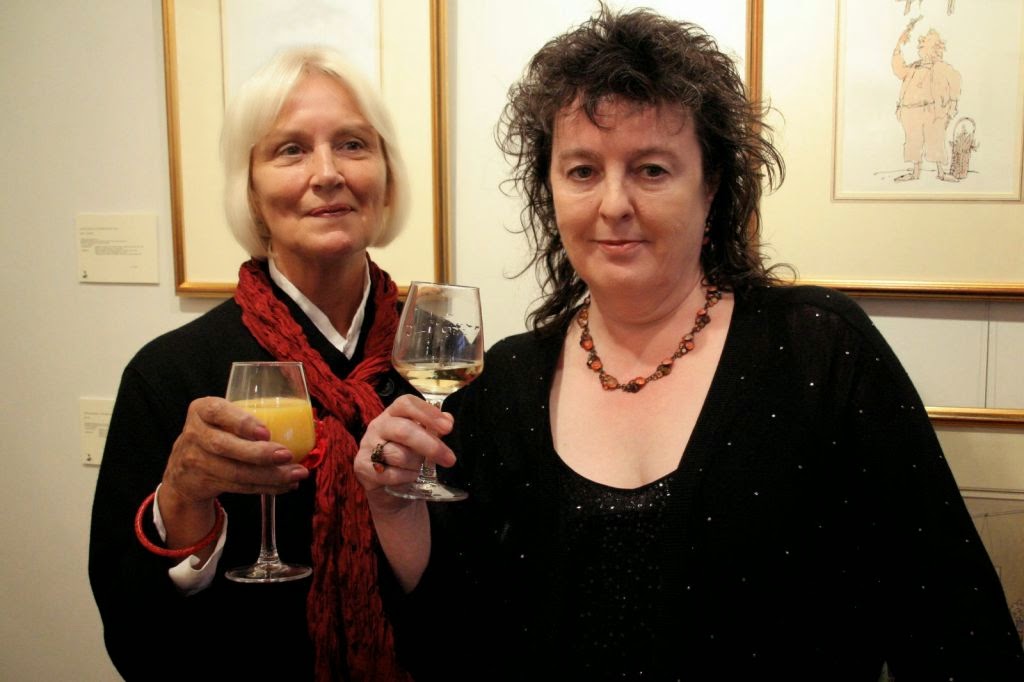 Friend of Fairlynch Museum and founder of Budleigh Salterton Literary Festival Susan Ward, left,  with Poet Laureate Carol Ann Duffyat a Brook Gallery reception in September 2010    Picture credit: Brook Gallery
New acquisitions in the Museum’s display of costumes this year consist of items from the Susan Ward Collection.
When Susan and her husband Charles moved to Budleigh Salterton in 2005 she soon became involved in fundraising for Fairlynch, becoming a Trustee of the Museum's Endowment Fund.But it was the Literary Festival that she founded which then became her real passion.
The first three-day Festival opened on 18 September 2009 with a strong line-up, including Hilary Mantel, H.R.F. Keating, Val McDermid, Simon Brett, the actor Sheila Mitchell and journalist Virginia Ironside.
Very sadly, after a long illness, Susan died peacefully at home in Budleigh on 19 June 2012.Thanks to a thoughtful gesture on the part of Professor Charles Ward, visitors will now have the chance to adm…
Post a Comment
Read more 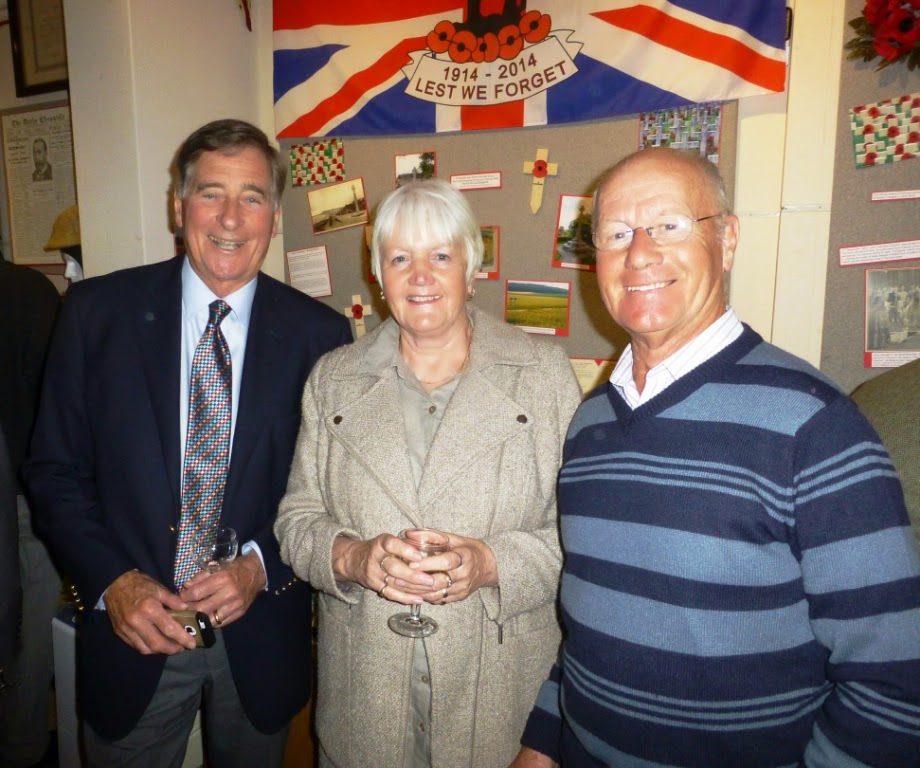 Friends of Fairlynch and many other supporters of the Museum enjoyed the opportunity of seeing the new season’s displays during our evening opening on 3 April. Many local Councillors attended the event. Left to right are Cllrs Alan Dent and Caz Sismore-Hunt, together with Alan Tilbury (President of Budleigh Salterton Chamber of Commerce).

The theme of the 2014 Costume Exhibition is ‘Fashion in the 1920s’, illustrated by this display of a dress shop interior.

Included in the Lace Room display are items made by a former Fairlynch lacemaker, recently donated to the Museum by her niece who lives in the USA.


Also in the Costume Room is a display of dolls and toys entitled  ‘Hidden Treasures.’

A debt of gratitude 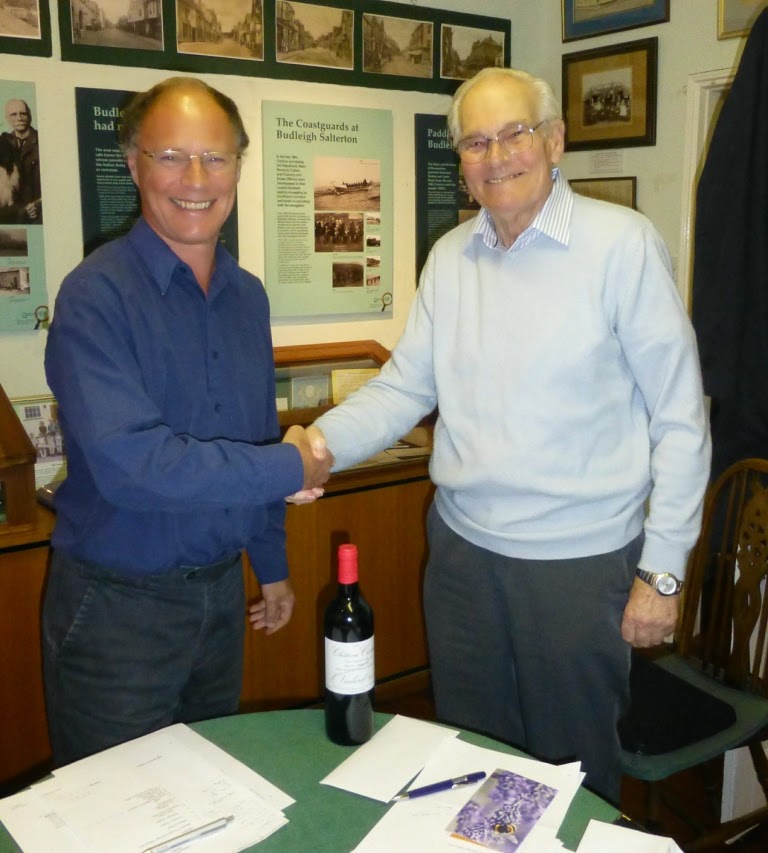 Much respected Treasurer of Fairlynch Jim Milverton finally handed on his account book today when he stepped down after looking after the Museum’s finances for many years.
“The most important position in any Board of Trustees is that of Treasurer,” said Museum Chairman Roger Sherriff. “Fairlynch has been very fortunate to have a Treasurer like Jim. Asthe consummate professional he has managed the Museum finances using sound judgement and his extensive knowledge.”
Jim, who with his wife Rose lives on Budleigh Salterton’s Coastguard Road, has also been Treasurer of the town’s Relief in Need Charity.
Looking after the Museum’s finances has often been complicated by issues arising from maintenance of the historic Grade II listed building, but Jim has proved to be a steady guiding hand, said Roger Sherriff.
“After over six years as Treasurer he is leaving the Museum’s finances well and truly in the black. We will miss his wise counsel and gentle good humour and we wish him and Rose well for t…
Post a Comment
Read more

Budleigh Salterton’s Fairlynch Museum welcomed visitors today with a range of brand new exhibitions and a smartly designed and renamed ground floor room to house its archaeological and geological artefacts.
For the first time in many years the Museum will be open on Saturdays, giving Budleigh weekend visitors the chance to appreciate something of the town’s heritage as well as soaking up the sun on the beach.
The World War One centenary, an exhibition of 1920s fashion, beautiful displays of lace, a collection of children’s toys and a look at the folders in Local History Room will all make for a fascinating afternoon for visitors. Especially if the sun doesn’t make an appearance.
Archaeological and geological items at the Museum, including the remarkable radioactive pebbles described by scientist Max Perutz, are on display in the refurbished Priscilla Carter Room.
Find out more about Fairlynch by clicking on our sites at http://devonmuseums.net/fairlynch andfacebook.com/Fairlynch

Storm at the Brook 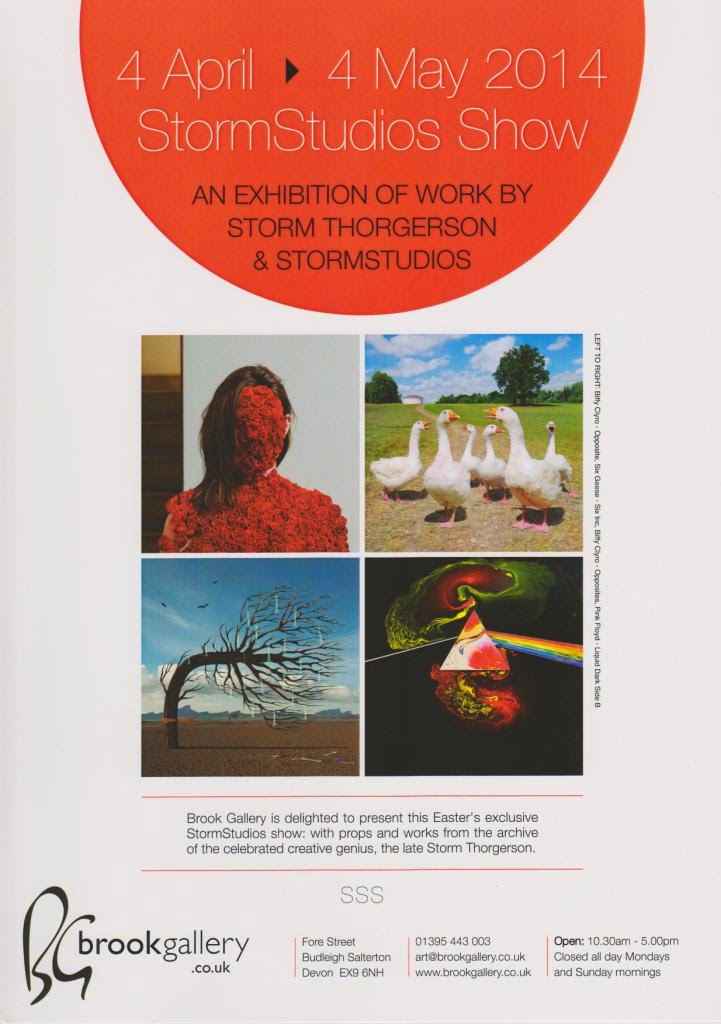 Pink Floyd lovers and many many others will be delighted to see that the Brook Gallery’s Easter show is devoted to work by graphic designer the late Storm Thorgerson.

A teenage friend of Floyd founders Syd Barrett and Roger Waters, Thorgerson, pictured above, was responsible for designing album covers for many other well known rock artists including Led Zeppelin, Bruce Dickinson and Muse.
We're delighted to welcome the Brook Gallery as the latest Corporate Friend of Fairlynch Museum. The Gallery's Storm Studios Show  runs until 4 May. If you can’t get along to see it in Budleigh Salterton take a look at http://www.brookgallery.co.uk/category.php?catid=126  to see the kind of amazing designs produced by Thorgerson, who sadly died last year aged 69.
Photo of Storm Thorgerson credit: Jheald