Showing posts from May, 2009
Show All

In a Heartbeat at Budleigh Salterton Gala Week 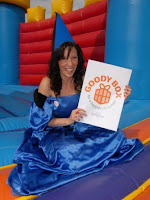 Budleigh-based charity In a Heartbeat’s Sam Cochrane made an eye-catching appearance at the town’s Gala Week Fete on Saturday 23 May to promote the group’s Goody Box scheme.

In a Heartbeat had three marquees at the Fete as part of Gala Week offering a range of adventurous activities.

Face-painting was one popular choice for visitors. Creations ranged from the starry…


and the really scary.


There was a giant lawn darts game.


And a large Velcro target game.


There was a also a football game, a ring toss game and a pick & mix sweet stall. Winners of the games got a lucky dip prize and there were lollipops for all who took part.

In a Heartbeat was formed in October 2007 and is run by an enthusiastic group of volunteers to try and make a difference in the local community while having lots of fun themselves. 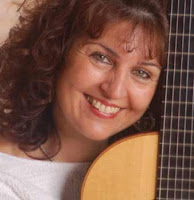 Described by a US reviewer as doing for the Greek soul what flamenco does for the Spanish, Eleftheria Kotzia, internationally renowned Greek born guitarist, takes you on an unforgettable journey to the shores of the east and west Mediterranean. The programme will include masterpieces by composers such as Joaquin Rodrigo, Roland Dyens, Regino Sainz de la Maza as well as Greek composers. Guitar favorites by Isaac Albeniz and Francisco Tarrega will also feature in this varied and spirited programme.


Born in northern Greece, in Alexandroupolis, Eleftheria Kotzia studied guitar at the National Conservatory in Athens, the Conservatoire National Supérieure in Paris, and finally at the Guildhall School of Music in London. Among her teachers have been Julian Bream, Alexandre Lagoya, Dimitri Fampas, David Russell and Timothy Walker. She was the winner of the first prize in the 6th International Guitar Competition in Milan.

A posting we all look forward to

May 28, 2009
He doesn’t have a black and white cat called Jess like Postman Pat, the character loved by kids all over the world who made his US television debut recently on children's network Qubo.

And he laughs at the idea of using a gyrocopter and a Blackberry to deliver his letters, but Steve Harrison, our local postie has all the qualities which made Postman Pat everyone’s favourite mailman. And I reckon he must be 100 times fitter when I see him cycling up Exmouth Road.

UK postal workers, it’s said, are living the nightmare of modernisation: job losses, closures and pensions at risk. But Steve keeps smiling. In a traditional town like Budleigh there is still an expectation of telephone boxes, village policemen and personal friendly service in local shops. And in our rural area the arrival of the postman does a little to reassure us that commitment and stability are still possible in the unstable and crazy world that we live in.

May 28, 2009
Is Budleigh really trying to tempt French-speaking visitors to the town with that Town Council’s motto of ‘Beau Séjour’ (literally ‘Have a great stay!’)?

If so, it might as well add ‘Bonne dégustation!’ For winemakers – or should we say viticulteurs? – Alan and Faye Pratt are ready and waiting for oenophiles – that’s winelovers to you and me – at their Lily Farm estate in Knowle, just a few miles west of Budleigh.

Above: Alan and Faye Pratt proudly show off a bottle of their Lily Farm Vineyard wine.


The first day of Budleigh’s Gala Week celebrations last Saturday also marked the showcasing of the couple’s wine from their celebrated red grapes. The event coincided with Devon Wine Week, which is part of English Wine Week. A vineyard tour and wine-tasting were on offer to visitors, with a small charge made to benefit Devon-based charity Hospiscare.

The couple amazed fellow vineyard owners recently when their first ever crop was ready for harvesting a month before anywhere else in the UK. Th…
Post a Comment
Read more

Fishing into the past 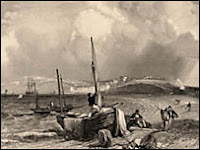 Budleigh Salterton resident Nick Loman has been using his local knowledge to piece together the history of fishing in his home town.

Having been a fish merchant in Budleigh for the best part of his working life, Nick is in an ideal position to gather information from the residents of the town about their memories and the legacy of Budleigh's fishing families.
Above: Sketch of Budleigh beach in 1837

"The change in Budleigh over time has been quite dramatic", Nick explains.

"Now that I'm semi-retired, I felt it was important to start making a record of our history, before it disappears."

In the 19th century, Budleigh was a thriving fishing town, with over a hundred boats registered to fish from there.

It was small clinker-type boats that were used off Budleigh, which had a low draught so they could be dragged up the beach.

Crabs were often the most popular catch and the fishing families also made their own crab pots from willow.

Brewster "Christmas Tree" to be chopped down

[The pressures of tourism, traffic issues and road safety in an area of historic heritage have combined to force a radical solution on the town of Brewster. It’s a situation with which Budleigh residents will sympathise].

Brewster will have to find a new tree to hang its Christmas lights on this year.

The tall spruce at the intersection of Stony Brook and Setucket roads is likely to be chopped down as part of an extensive remodeling of the Stony Brook mill site.

Brewster’s Town Councillors, known as Selectmen, spared the 70-foot, 60-year-old white spruce from the axe last year, when the topic came up, but extensive studies by Russell Kleekamp of Stearns and Wheeler environmental engineers of Hyannis determined there was no viable alternative.

At a recent public hearing selectmen approved, by a 5-0 vote, a plan that would replace the tree, add parking and straighten the intersection.

“The tree is showing signs of age, is in poor condition and digging deep around the roots could impact the t…
Post a Comment
Read more 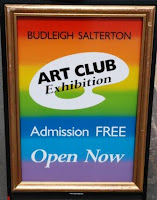 Founded in 1805, Budleigh Salterton Art Club has held exhibitions of its work for many years in the Public Hall: a one-day show during Gala Week, another as part of late night shopping before Christmas, and the annual ten-day exhibition in August.

Not surprisingly, the beautiful countryside of East Devon inspires many members to create work depicting familiar local scenes, some of which were on show in this year’s Gala Week exhibition.

The Club describes itself as a friendly group of people who share a love of producing art, ranging from beginners to professional artists. It meets on the last Wednesday of the month from 10.00 am – 12 noon in the Peter Hall, for talks, demonstrations, mutual support and to learn new techniques.

Last year it had to be postponed. This time we all thought history would repeat itself and indeed the weather forecast was dire for Bank Holiday Monday 25 June, the day chosen for Budleigh Salterton Gala Week’s Pebble Building Competition on the beach at Marine Parade from 10.00 am to 11.55 am.

Happily, Budleigh’s micro-climate played its part and the rain held off.

There were three classes in this event, organized by Budleigh Salterton Lions, with prizes of £15, £10 and £5 offered for the best three entries in each class. One class was for the tallest family-built castle. Above: The three ages of Man at work


Colours can be used to good effect in castle-building.


The second class offered prizes for the tallest castle built by children up to 13 years.


But I noticed some mini-builds.

A father and son are pleased with their stonemanship. (Yes, that is a boat.) (Sorry!)

Radio Budleigh: “Just One Thing After Another”

Radio Budleigh’s show at the Salterton Drama Club’s Playhouse was part of the town’s Gala Week. The production was a nostalgic look-back at 50s’ radio shows, and it seemed only natural to record these moments from the Gala Night performance on 23 May in black and white. (Thanks to Ian for that idea!)

It was the second live broadcast staged by the Salterton Drama Club. The cast, or as they called themselves The Players, presented a programme of sketches, monologues and songs for our entertainment. The audience included Budleigh’s new Mayor Courtney Richards, wearing his chain of office.


Refreshments were served by the Players prior to the performance and during the interval.


We were asked to join in by applauding, laughing and singing when required “to give a convivial atmosphere for our listeners at home.” The audience was also asked to ensure that our “portable telephonic equipment” was switched off.